Computational research is very suitable for master projects and shorter student projects (such as Fördjupningskurs), because it's possible to reach far into the research process in a fairly short time. And along the project, you can learn skills like programming, high-performance computing, data visualization etc.

Below are some current (2020) project ideas, but as our research projects develop, new ideas pop up all the time so please contact me to have a chat about possible projects. And don't hesitate to bring your own ideas of what you would like  to do. In computational research we are not limited by available chemicals or expensive equipment; if a project is doable, we just do it!

When looking at pictures of solved protein structures from Protein Data Bank, one gets the impression that the structure is static, but this is not true. In addition to harmonic vibrations around the equilibrium state, the protein constantly undergoes conformational changes (local fluctuations) occurring at the nanosecond, microsecond, millisecond, or even longer timescales. Some of these involve the rotation of a single amino-acid side chain, whereas others have the character of partial unfolding of an α-helix or β-sheet. While there is general agreement that the local fluctuations are important for the function of both enzymes and signalling proteins, nobody knows how these local fluctuations, sometimes called protein breathing, look in detail.

In this project we will use molecular dynamics (MD) simulations to investigate local fluctuations in proteins. However, MD simulations of proteins are in practice limited to a few hundred nanoseconds of simulation, if one wants to model all atoms explicitly. To make the "slow" (millisecond) movements  happen during such short simulations, we will apply enhanced sampling techniques. These can either increase the general fluctuations (e.g. by raising the effective temperature) or increase the sampling along some specific reaction coordinate that one is interested in (e.g. the metadynamics method). Fortunately, there are plenty of suggestions in the literature of what the local fluctuations could look like. By applying metadynamics on the corresponding reaction coordinates, we can confirm or reject these suggestions, and at the same time get atomistic detail of the mechanism of these local fluctuations.
We will compare the results to hydrogen exchange (HX) NMR experiments, in which one measures the rate of exchange of hydrogen atoms between the protein backbone and water molecules. A low  rate (equivalent to a high value of the protection factor in the figure below), indicates a high free-energy cost for the particular fluctuation that "opens" this part of the structure. This free-energy cost can also be estimated from our simulations, thus connecting the theoretical and experimental worlds. 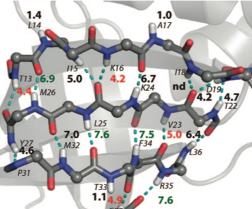 The values are logarithms of protection factors for a part of the protein Staphylococcal nuclease, as measured by hydrogen exchange NMR. Can we explain why the numbers are so different even within the same β-sheet?

The specific binding of small molecules (ligands) to proteins is the basis for many biological functions, such as signalling and enzyme activity. It is also the way that most drugs work. If one could predict the binding free energy by computers, drug developers could assess drug candidates without even synthesizing them.

One of the most rigorous methods used to calculate binding free energies is free-energy perturbation (FEP). It involves two series of molecular dynamics (MD) simulations in which the ligand is artificially  transformed to another ligand, for which the binding free energy is known. One series is performed with the ligand bound to the protein, and the other with the free ligand in water. A problem with FEP is that the sampling of the conformational space of the ligand and binding site may be limited by high energy barriers. This is particularly troublesome if the two ligands bind in slightly different conformations, or if the protein itself adopts different conformations in the two cases, as illustrated in the figure below. If the energy barriers separating the conformations are high, the simulations could get trapped in one conformation and the result would be wrong.

In this project, we will try to solve this problem by enhanced sampling methods. Typically, these methods work either by increasing the effective temperature in the simulation or by artificially flattening the potential-energy landscape, as illustrated in the figure below. In particular, we will build upon a recently proposed method that performs several simulations at the same time, differing in the amount of flattening of the landscape. By letting the simulation "jump" between the various conditions in an organized way, conformational changes can occur more easily. The previous study used pre-determined, rather arbitrary flattening potentials. We will instead use the metadynamics method to build up the potentials on-the-fly.